Don’t do business with this fraudulent scammer: Olu Micheal of Forbes Global Project.

The headache started when a victim contacted this agency online named FORBES GLOBAL PROJECT with Olu Michael as the owner. The business looked legit because of the advertisement and endorsement from notable actors and actresses. The victim was charged 3million Naira for the US visa and requested for 2 million deposit, which he paid and he was given four months for processing.

Despite giving the victim receipts and agreement to fulfill the obligations in 4 months, he kept lying about the status of the visa claiming that it was close and that they were working on it. As months passed by, the scammer, Olu Michael kept reading messages without replying. After months of dodging the victim, they finally arranged to meet and the scammer proposed another date, to which the victim agreed with after the scammer talked of the issues faced regarding the Visa.

And when it was time, once again, the scammer didn’t fulfill his promises and the victim threatened him till he gave out a cheque. A postdated one for that matter and to the victim’s shock, the cheque bounced as the scammer had no dime in the account.
Olu Micheal later sent 1,000,000 when he was threatened again and has been posting the victim till now. He is not even h accessible with his office under lock and key.

Other people came out to share similar experiences. Giving them bounced cheques and countless excuses.

Find some screenshots below, where he immediately went on his page to make an apology post. If you check his Instagram page you will notice he has limited comments and disabled comments on the scam company page too. 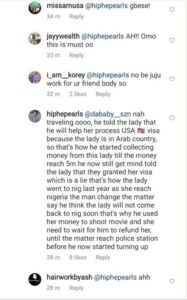 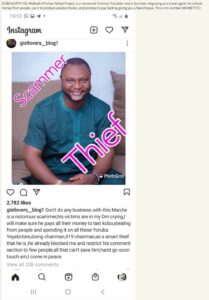