My Wife Was Scammed By Mrs. Joy Binomo Investment

Yesterday, my wife asked me to transfer some money to someone. When I asked her for the purpose of the transaction she was silent at first, then later she said it was a business transaction and will give me the details later. Fast forward to about 8:00p.m, my wife was sad and said “honey let me open up to you, I have been scammed”.

The scammer’s name is OGIES MARVIS OSAIGBOVO and uses the alias of Mrs Joy Binomo Invesment on Facebook and Twitter.

Their Strategy: They search for their unsuspecting victims on Facebook, Twitter and Instagram promising to triple whatever cash investment in two (2) hours. They will ask you add to them up on Facebook with the intention of blowing your mind with the success stories on their page. And should that work, they’ll give you the account to invest.

First Red Flag: You are asked to transfer the money to an Access Bank account name: OGIES MARVIS OSAIGBOVO and send a proof of payment to them on Facebook. I was not cautious enough at this point to get further information about the transaction.

Second Red Flag: After this, my wife was told that she will be paid in next two hours which was to be by 7:00p.m. since the transaction was done around 5:00p.m.

When she opened up to me about the failed transaction, she immediately made a post on Facebook tagging Mrs Joy Binomo Investment as a scammer and shared on her page. Would you believe it that these scammers had prepared for such alarms? They quickly delete every negative post on their page and block the sender within seconds. They blocked my wife from their page. They did this so that unsuspecting victims may never see such posts, thereby never believe or fall for their scams.

Third Red Flag: It later becomes obvious that all the so-called success stories were forged by themselves. It is after they have blocked that you will know that you have been scammed. 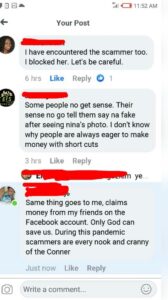 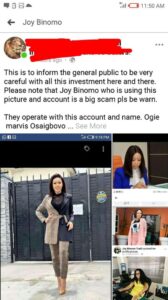 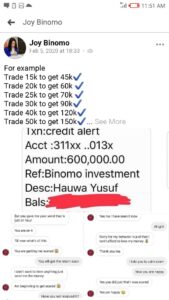 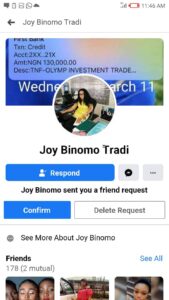