Three Nigerians were sentenced to prison in Ireland for defrauding a 66-year-old woman of €282,000.

Three Nigerians have bagged various jail terms for conning a 66-year-old woman out of her €282,000 life savings in Ireland.

According to the Irish Times, the trio transferred approximately €250,000 from Ireland to accounts linked to false companies set up in Turkey and Vietnam. The gang is thought to have used the money to buy products to ship back to Nigeria and sell.

The woman met a man named Neil Turner on a dating website in November 2019, according to the court. Gardai downloaded over 800 pages of messages from the two as they began to message each other romantically.

Using the fake profile, the fraudsters told the woman that Turner had business dealings with oil and gas off the coast of Cork. He also informed the woman that he was about to inherit a large sum of money.

He began to approach the woman for financial assistance with his business. She made the first of ten payments to Turner in November 2019. She transferred just over €254,000 to the phony persona over the course of six months.

Investigators tracked down the three accused using their email addresses and bank accounts and went to their homes. Gardai seized several laptops and mobile phones and discovered usernames and passwords for Turner’s profile on the dating website on these devices. 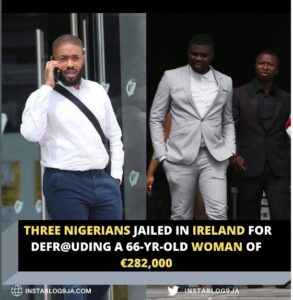